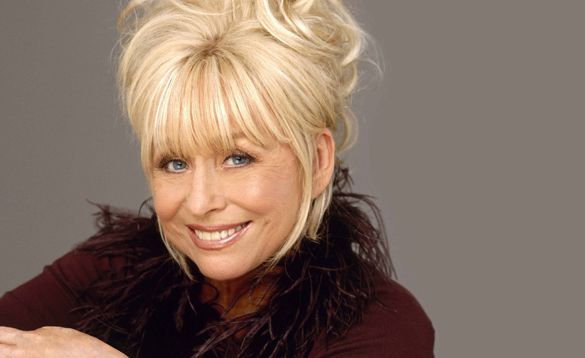 Barbara Windsor is one of our most beloved icons. She was awarded the MBE in the Millennium New Year honours. Her long showbiz career has earned her various awards, not least for her portrayal of Peggy Mitchell in Eastenders. A true Eastender herself, Barbara made her stage debut age 13 in pantomime. A year later she made her West End debut in the musical Love from Judy. She’s appeared on Broadway in “Oh What a Lovely War”, where she received a Tony Award nomination for Best Supporting Actress and starred in London’s West End in Fings Aint What They Used To Be.

Her many hundreds of TV appearances include the hit series The Rag Trade, Dads Army, Worzel Gummidge and One Foot In The Grave. Barbara has appeared in numerous British films including Chitty Chitty Bang Bang, The Boyfriend, Sparrers’Can’t Sing , but is best known for her Carry On Films.

She has toured all over the world in plays and musicals, and is still one of the most sought after Pantomime stars in the UK. Barbara played herself in Terry Johnson’s Cor Blimey on ITV, based on his play Cleo, Camping, Emmanuelle And Dick, which won an Olivier Award making her the first living actor to be portrayed in a play.

Her autobiography “All Of Me” reached number two in the best sellers list in both hard and paperback. Barbara was the subject of BBC’s Who Do You Think You Are, as well as a guest appearance in Dr Who.

In 2009 Barbara was awarded a Lifetime Achievement Award at The British Soap Awards for her work in Eastenders and past contribution to television. In 2010 she was featured as the voice of The Dormouse in Tim Burton’s 3D feature film and box office hit, Alice in Wonderland. In September 2010, Barbara left EastEnders after 16 years of playing Peggy Mitchell and has since been the subject of Sky 1’s Little Crackers series, in which she appeared in a cameo role, and a regular presenter of shows on BBC Radio 2. And to Barbara’s amazement, she was also given The Freedom of the City of London.