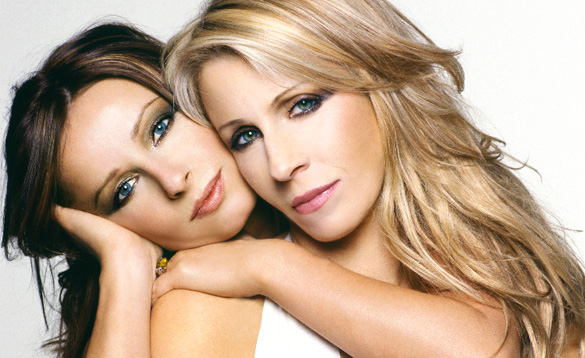 Bananarama were formed in 1982 by teenagers Sara Dallin and Keren Woodward, Sara then met Siobhan Fahey at the London College of Fashion while studying journalism. Sara and Keren lived above the rehearsal room of former Sex Pistols Steve Jones and Paul Cook. They ended up recording a demo Aie A Mwana with Paul. It was signed by Demon Rec. and was given its first radio play by John Peel. The song was a club hit and a favourite of Terry Hall from the group the Specials. He promptly called them up and asked if they would collaborate on his latest project the Fun Boy 3. Their first hit together was Ain’t What You Do. The guys then returned the favour by guesting on Bananaramas first TOP 5 Really Saying Something.

Bananarama had always written their own material but their songwriting came to the fore in 1986 with their first US TOP 10 Cruel Summer.

In 1987 they penned I Heard A Rumour ( US no.4) with Stock, Aitken, Waterman followed by Love In the first degree, I Want You Back, and ‘Venus’ their first US NO.1.

In 1987 they entered the Guiness Book Of World Records as the most successful girl band in the world (the most Top 40 hits) and still hold the title to this day with 30 Top 40 hits, 11 albums and over 40 million records sold. Having taken the title from the Supremes they decided to pay tribute to them by recording ‘Nathan Jones’.

1989 saw the departure of Siobhan. (replaced briefly by Jaquie O’Sullivan) and a world tour kicking off in the US.

Early 90’s they released the album Pop Life , with hits Only your Love and Preacher Man, and a further 3 albums, Please Yourself,Ultra Violet and Exotica (By ’92 Bananarama were a duo, Sara Dallin and Keren Woodward).

They returned in 2006 with the album Drama produced by the Swedish team Murlyn giving them 2 more Top 20 hits in the UK,Move In My Direction and Look On The Floor, both no.1 and 2 club hits in the US Billboard Chart.

Currently they have been performing in the US and Asia and have just finished some Here And Now summer dates in the UK.