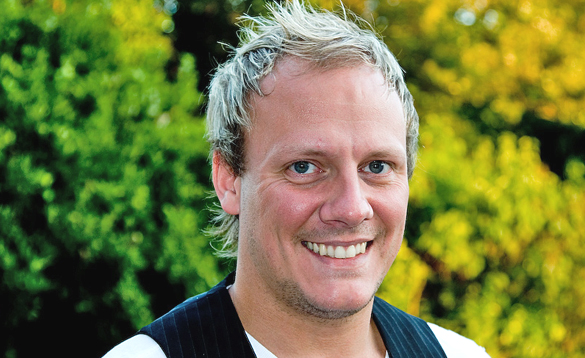 Cotton was born Antony Dunn in Bury, Greater Manchester, the son of actress Enid Dunn.[1] He attended Woodhey High School at Holcombe Brook, Ramsbottom, and the Oldham Theatre Workshop. He has an elder brother, Andrew. Cotton supports the Terrence Higgins Trust and is a patron of the LGF The Albert Kennedy Trust and the Queer Up North festival. In August 2009, it was reported in Digital Spy that Cotton is “openly gay”.  and in March 2010 the Daily Mirror reported that Cotton had exchanged rings with his partner, Peter Eccleston. In January 2012, footballer Michael Ball was fined by the Football Association for a homophobic rant on Twitter about Cotton.

Cotton currently plays barman and factory worker Sean Tully in Coronation Street.[7] Cotton played “Alexander” in the original UK version of Queer as Folk. He has also appeared in episodes of Absolutely Fabulous as “Damon”. On 13 January 2007, Cotton won the second series of ITV’s Soapstar Superstar. He donated his winning money, £200,000, to the Elton John Aids Foundation. In July 2007, it was announced that Cotton would be fronting his own teatime chat show on ITV. The show, That Antony Cotton Show, was filmed with a live studio audience at Granada Television studios in Manchester, and combined celebrity chat with topical humour. It was first broadcast on Monday 13 August 2007 however, following the end of the first series, ITV announced that the show wouldn’t return for a second.[8] He appeared on Family Fortunes on 20 September 2008 winning £10,000 for his chosen charity. In December 2008, he appeared with co-star Suranne Jones on Who Wants to Be a Millionaire?.

He also took part in the eleventh series of I’m a Celebrity…Get Me Out of Here! which began airing on 13 November 2011. He left on 2 December 2011, after 21 days in the jungle, placing fourth. Cotton also starred in an episode of Mad Mad World on ITV1 in Spring 2012. He won first place in a series of Let’s Dance for Comic Relief in March 2013.

Cotton made his film debut opposite Daniel Craig and Derek Jacobi in the 1998 film Love Is the Devil: Study for a Portrait of Francis Bacon.[9] He also appeared in the 1998 film, The Wisdom of Crocodiles.

Cotton has appeared in several shows at the Oldham Coliseum, including The Fifteen Streets and The Hobbit at Manchester’s Palace Theatre and Opera House. He appeared in Snow White and the Seven Dwarfs in the Middlesbrough Theatre.

In 2005, Cotton won the Most Popular Newcomer category at the National Television Awards for his role in Coronation Street.[10] Cotton won the 2005 Inside Soap Awards for Best Newcomer and Funniest Performance. 2006 he won (again) the award for Funniest Performance. At the 2007 British Soap Awards, Cotton was awarded the Best Actor award, which was voted for by the public. Also in 2007 he won Best Actor at the Inside Soap Awards.