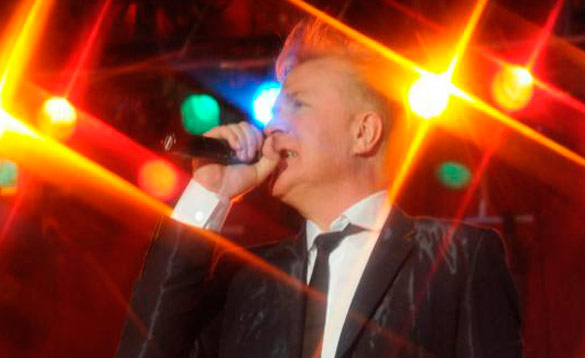 With the release of Look of Love; The Very Best Of ABC the group celebrate their return to the recording studio and to high-publicity performances, galvanised by some gorgeous new songs and a series of dates with Robbie Williams.

What will Robbie Williams make of Martin Fry? His sly northern wit and subversive intelligence, pop flamboyance and rock swagger, gold lame and lyrics that deal with treachery and regret. Robbie’s no fool. He recognises the perfect mixture of ecstasy and sorrow, club usability and pop accessibility, when it falls in his lap.

If tomorrow a bunch of white northern students decided to form a band inspired not by the integrated-to-the-point-of-invisibility Beatles-Kinks-Stones but instead by the collective irrationality and transcendent imaginations of Aphex Twin, N*E*R*D and The Beta Band, you’d still only be halfway towards understanding just how fundamental a break with tradition ABC effected in that period between punk and Manchester/grunge.

Imagine a band from the alternative/indie sector whose idea of a dream version of pop music includes the metallic foreboding of Iggy Pop circa ‘The Idiot’ and the symphonic magnificence of Earth Wind & Fire circa ‘I Am’; imagine the savagery of The Sex Pistols barely concealed beneath the surface of a Chic sophistication. ABC were (are) that band. They took that idea and they made it happen. Across the hit parades of several continents.

This is why ABC were praised to the skies in the eighties and it is why they are still loved to this day. It is not a question of nostalgia, it is a matter of contemporay urgency. ABC are no museum piece; they are an object lesson in how to avoid the obvious. They should be on the curriculum.

Meanwhile, their recordings are national treasures. First, now and forever, was The Lexicon Of Love (1982), not just a sensational debut but one of the greatest albums ever made, with its brass constructions and guitar ravishments, Anne Dudley’s shivers of strings and Trevor Horn’s epic bombast transforming the drum beats into epochal bomb blasts.

The self-immolating exercise in hard rock style/anti-style that was Beauty Stab (1983) came next, and to suggest that it caused less delight than dismay on its release would be the understatement of the century.

Third LP How To Be A Zillionaire (1985) surfed the wave of innovation in the area of electronic rhythms and came in cartoon colours. The shiny neo-soul of Alphabet City (1987) positioned ABC musically and ideologically if not alphabetically, somewhere between Motown and ZTT, Philly and Ze.

Phase V of ABC gave us Up (1989) and Abracadabra (1991), energised by the then-vibrant house scene, stealing moves from Chicago just as those dudes stole from ABC and their electrofunk peers. Skyscraping (1997) might have provided a fine coda to the ABC story if only Martin Fry didn’t have behind that famous blonde fringe of his a brainload of new songs and new ideas.

“We toured with Culture Club and The Human League,” says Fry, recalling ABC’s recent arena dates with those other masters of synthetic-romantic dance, explaining just where the hell he’s been of late. “I was onstage at Wembley Arena, standing next to Phil Oakey and Boy George, people with a past. For years, I was terrified of the past, but seeing the audience… I realised the importance of those ABC songs.“ For a few seconds, he felt “surprised at how many people turned up.” Then, a satori, a moment of enlightenment. He knew what he had to do.

So he made a series of seven radio programmes about music from punk to live aid, The Look Of Love, for radio 2 in which he paid his respects to Depeche Mode and Soft Cell and played Japan’s “Ghosts” and Talk Talk’s “ Life’s What You Make It”, if only to demonstrate the period’s essential shift in attitude and prove “it wasn’t all about Kajagoogoo and funny haircuts”. And he answered a call from Robbie Williams, the biggest pop star in Britain, inviting ABC to support him on tour.

“I looked in the diary and said I was free,“ he says. Joking apart, Fry admits: “It’s a real accolade, an honour to perform in front of hundreds of thousands of people in some of the biggest stadiums in the country.”

On a roll, he wrote two new songs: Peace And Tranquillity (formerly “Pocket Divinity”) and Blame, his finest compositions since the glory days. He oversaw this ABC retrospective (‘The Look Of Love: The Very Best Of ABC’). Finally, he got a new suit from William Hunt of Savile Row – not gold lame; platinum.

Now Martin Fry’s time has come – again. “People are yearning for flamboyance,“ he considers. “If they want that, they call me. That’s what I do. I’ve got to walk it like I talk it. I’m confident about what ABC achieved, that I defined something. That’s why I want to keep making records. That and the fact that I haven’t yet written my ‘Endless Sea or ‘My Way’.”

“The key,” says Martin Fry, “is to keep developing. I’m not glued to the past. I’m looking forward. And I’m really looking forward to all this. It’s going to be a gas.”