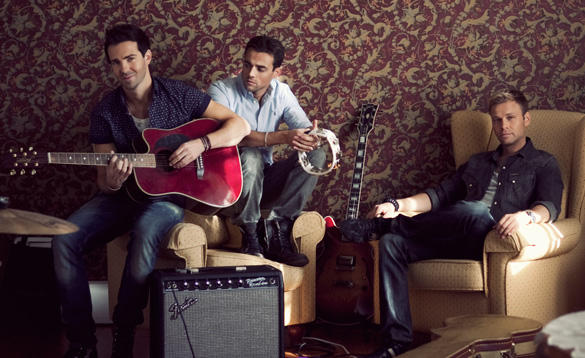 a1, The British-Norwegian band consists of Ben Adams, Mark Read and Christian Ingebrigtsen. The band had their first breakthrough in The UK in 1999 with a collection of hit singles taken from their debut album.

They went on to have many International Top 10 and number 1 hits including Caught In The Middle, Same Old Brand New You, their cover of the A-ha classic Take on Me and Everytime to name but a few. They achieved massive success in the UK, Europe and across Asia, including a Brit Award for Best British Breakthrough Act in 2001. In 2002 the band decided to take a break to pursue various solo projects. Fast forward seven years, and due to great demand, the band reunited in Norway, home to Christian, who invited Ben and Mark over for what was originally intended to be a one off performance on a popular TV show. But after an overwhelming response and record audience numbers, this would spark the beginning of what would become a fantastic comeback for a1, performing more than 50 concerts across the country in 2010-2011. Their 4th studio album Waiting For Daylight was released in October 2010 and topped the album charts, with new songs such asDon’t Wanna Lose You Again, Waiting For Daylight, Take You Home, and In Love and I Hate It. After years of touring in Norway, a1 were ready to take the momentous comeback out of Scandinavia and mirror the success throughout the rest of the world. In the spring of 2012 a1 went to South East Asia with The Greatest Hits Tourwhich was a massive success. Waiting For Daylight was released in many Asian countries and a1 once again reached number one in the charts as well as on the radio.

The band will return to Asia later this year to follow up the overwhelming success. Ben, Mark and Christian are all successful songwriters and producers and together they are managing Planet A Studios in London and Oslo. Planet A Studios are developing new artists, as well as continuing to write hits for existing bands.

As well as releasing their own albums, a1 have written, produced and worked with many international artists over the years. In Norwaya1 has recently released new single Trust Me which takes a new musical route with its raw 60s inspired sound. This single is taken from a1’s new album Rediscovered that was released in Norway on 2nd November 2012. This album is a musical journey that brings a1to rediscover what got them into music in the first place; extremely catchy pop songs, with a back to basics approach. From the very sing-along-able Christopher Columbus which helped inspire the album title, to powerful and stomping dance floor tunes like That Somebody Is Me and Lovesick.

But whilst this album is about going back to their roots, it’s also about venturing into new territories, and a lot of people may be quite surprised by the 12 songs a1 have written for this album. For a1, this is THE album that will bridge the gap between fans who‘ve stayed true for all these years, to the people who are discovering them for the first time.