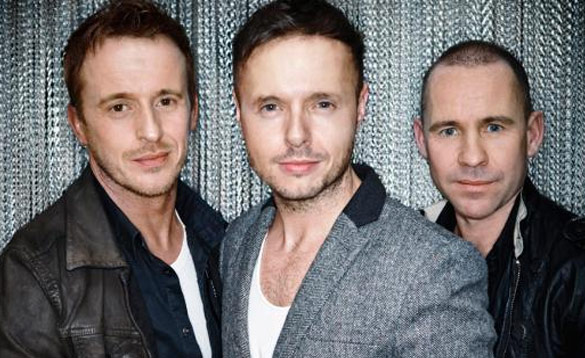 Having begun their careers as dancers on the cult late night TV show “The Hitman And Her,” Spike Dawbarn and Jimmy Constable developed their own avid fanbase. Spike: “As dancers we were getting a better response than the acts we were supporting so we thought we’d form a pop group of our own.” Lee Brennan met Spike and Jimmy at a roadshow he took his little sister to and convinced them to let him join the band, and 911 were born.

Liverpudlian Jimmy Constable was born on 21st September 1973 and admits to having a crush on pop bade Louise. He grew up wanting to be a Liverpool Football player but gave in to his love of music.

He draws his musical influences from idols like Michael Jackson and soul man Bobby Brown. Jimmy confesses to being a hopeless romantic and says his ideal date would be having a romantic candlelit dinner and bombarding his date with chocolates and flowers.

Lee Anthony Brennan was born in Carlisle on 27th September 1975. Carlisle United supporter Lee cites Wet Wet Wet, George Michael and Take That as his major musical heroes and admits that he’d like to work with Gary Barlow.

His favourite TV programmes are Spiderman, Top Of The Pops and Power Rangers. Lee: “On my days off I read fanmail, listen to some music, try to write some lyrics, have a cup of tea, phone me mother and dad and try to remember what you’re meant to do with a day off.”

Simon “Spike” Dawbarn was born on Warrington, near Manchester, on 15th August 1974. Football mad Spike would like to play football at Old Trafford and has a passion for chips, eggs and beans.

Spike likes nothing more than watching telly comedy favourite “Bottom” and the 22 year old is a huge fan of Janet Jackson.

Some of Spike’s most annoying habits are that he is messy, very mischievous and can’t get to sleep without the telly blasting away. Not surprisingly, in hotels Jimmy and Lee are less than willing to share a room with him!

The last 12 months have been extremely busy for 911. Choosing to cover the classic Shalamar hit Night To Remember as their first release, they followed this Top 20 hit with Love Sensation By this point 911 was fast becoming a household name and had established a high TV and radio profile. Keeping the feel of dance/pop music alive, their third single Don’t Make Me Wait gave 911 their first Top 5 hit.

After the huge success of their latest single The Day We Found Love – an emotional ballad which again reached Top 5 in the UK charts – 911 have released their debut album The Journey, currently riding high in the Top 20 album charts.

In such a short space of time, Jimmy, Lee & Spike have gained outstanding credibility and are looking forward to continuing success both here and abroad. 911 are not only Top 10 material in almost every European country, but are fast becoming hot property in Japan.